Meet Julie and Kenny, can you be their solution? 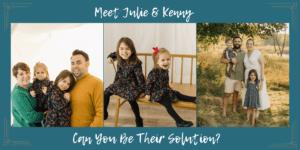 Julie and Kenny met at the age of 20 in the summer of 2004. Julie was touring a college in Illinois, and Kenny was the student who greeted her at the admissions building on her first visit to campus. Kenny was also the first person she would see when she arrived to attend college a few months later. Kenny and Julie became friends, and even when Julie transferred to a different school, the two continued to keep in touch. As fate would have it, Julie and Kenny’s friendship turned into a dating relationship seven years later, and the rest is history. They were married in 2015 and are still going strong!

Julie and Kenny have been one another’s greatest support, and to say they have had challenges the past several years is putting it lightly. They started trying to have children soon after they were married, but due to Julie’s PCOS she was having a difficult time getting pregnant. She was finally able to conceive after going through two IUI treatments, and that pregnancy resulted in the birth of their daughter, Frances (age 5). When Kenny and Julie started trying for Baby #2, they went through 6 failed IUI treatments before conceiving their son on their first IVF attempt. Sadly, they lost their little boy at 22 weeks gestational in 2019. At that moment, their life changed forever. They knew their story couldn’t end there with the extreme sadness and loss they felt, and they wanted to try to have one more child. Once cleared by an MFM, Julie underwent a frozen embryo transfer and got pregnant with their 3rd baby. That pregnancy was extremely high risk but resulted in a beautiful baby girl.

After the birth of their baby girl, Julie was diagnosed with breast cancer at 6 months postpartum in 2021 and had to undergo a double mastectomy and chemotherapy. Now in remission and determined to bring their last embryos to life, Julie and Kenny need the help of a gestational carrier to complete their family.

Kenny and Julie love their girls more than anything in the world, and they are extremely grateful someone would consider helping them. As a family, they enjoy attending concerts and festivals, and they love taking family trips together. Kenny is a firefighter who loves sports and plays baseball, soccer, and rugby. Julie works for a pharmaceutical company and loves entertaining and having friends and family over. If she could plan a birthday party for her kids every month, she would. Julie also enjoys volunteering her time for various nonprofits geared for children. Together Julie and Kenny enjoy time with the family watching movies, whether at home or in the theater. They just love being together!

If you, or someone you know, feels called to help this precious couple complete their family, we would love to talk to you. You can learn more about the process and apply to be their surrogate at www.SurrogateInformation.com.

Why use an agency, Surrogate Requirements, Can I be a Surrogate?, Facts about Surrogacy, Information on surrogacy,  What our agency can offer you , Surrogacy FAQs, Families who need you, Learn more, Apply now.